Let me introduce you to our Klezmer band "Dance of Joy." We are four professional musicians with years of experience in many different types of music. Our Klezmer band features the clarinet (Johannes Flamm), the fiddle (Johanna Schmidt), the accordion (Alfred Krauss) and the upright bass (Manfred Hilgers). A few years ago, we founded this band in order to acquaint and thrill our audiences with the sounds of traditional Jewish music. We chose the name "Dance of Joy" for our band because this name reflects the vitality and the vigor which Klezmer music exudes and which we feel whenever we play it. Survivors of the Holocaust say that faith, hope and a sense of humor were vital sources of strength and energy which helped them to endure and survive. Faith, hope, wit—you will hear these three forces in Klezmer music, a music that invites us all to dance and sing in the face of sorrow and pain and in order to overcome sorrow and pain. Our arrangements combine the expressive power of traditional Klezmer pieces with the seeming ease and lightness and the improvisational power of jazz. We sweep our audiences away with a successful blend of exuberance and poignant expressiveness and they in turn reward us with standing ovations and endless requests for encores. Tel: +31-43-3064905. Web: www.dance-of-joy.de. (Johanna Schmidt)

The three-armed Datcha y Lama, based in Clermont-Ferrand, France, is a strange creature that first saw the light of day in June 2003: one arm plays the accordion, the second one the clarinet, with the third frantically strumming the strings of a mandolin or a guitar. Witnesses have heard melodious harmonies issuing forth from its bellowing jaws. A beast of Eastern European origin, it feeds mainly on the memory of Jewish ghettos, klezmer beats, washed down with Slavic melancholy. The three-armed Datcha y Lama thrives in front of appreciative audiences and enjoys mixing with other musical life forms, for which it has been known to migrate across great distances. Tel: 00 33 (4) 73 34 09 35. (Frédéric Contassot)

The music of the David Klezmer Quintet is traditional Jewish music which is alloyed with the music of the XX. century.The quintet was formed in 1999. The repertoire contains well-known and not so well-knowns jewish melodies, own melodies and improvisative solos. Members of the quintet are: József Dávid - clarinet; István Kerek - violin, viola; Katalin Agnecz - accordion; István Rózsa - tuba; Péter Árkosi - drums, percussion; all graduate or former graduated students of the Liszt Ferenc Academy of Music,Budapest,Hungary. The David Klezmer Quintet is a concertgroup, they invite the audience to have joy in their great, show-effect-crammed live performances. Besides giving concerts, the quintet is also playing live on stage in the cabbalistic legend "Dybbuk" from the author An-Ski in a Budapest theatre. The quintet have been awarded with eMeRTon prize of the Hungarian Radio and Televsion in the category "for the best studio concert in year 2000". Contact: Mr Rózsa István, csut u. 6/c, 1225 Budapest, Hungary. fax:+36 1 207 5953. Web: www.davidklezmer.fw.hu.

Davka has been called neo-Jewish-roots-fusion, the acoustic equivalent of a Chagall painting, New klezmer-Middle-Eastern-jazz fusion, Middle-Eastern Ashkenazi jazz, fiddler-on-too-much -Turkish -coffee. Whatever the label, DAVKA's music is filled with passion, lyricism and virtuosic interplay. Ori Nir in Israel's Ha'Aretz put it this way, "Davka does with Jewish motives what composer Bela Bartok does with traditional Hungarian motives. The result is impressive - the group creates rich, colorful, and polished harmonies infused with inspiration." Davka is Paul Hanson, Bassoon, Daniel Hoffman, violin, Kevin Mummey, percussion, and Moses Sedler, cello. The band has three CDs, an eponymous first album, "Lavy's Dream" (1996), both of which were rereleased on Tzadik in 2000. The third release, "Judith" came out on Tzadik in 1999. Web: www.davkamusic.com. (Daniel Hoffman).

Los Desterrados—"The Exiles"—are a London sextet who on 'Tu' have created their own radical, rousing and rootsy take on the ancient folk music of the Sephardic Jews. As the Gipsy Kings reinvigorated flamenco and the Gotan Project revitalised tango so Los Desterrados have brought vibrant new life to the ancient music of the Sephardic Jews. Fusing Spanish Flamenco and the fiery Gypsy melodies of the Balkans and Greece with the rhythms of Morocco and Turkey, Los Desterrados have created a rootsy Mediterranean sound that is wholly their own. Featuring traditional instruments such as the cajón and ‘oud with vocals in Ladino, the language of the Sephardic Jews, or Hebrew, the unconventional arrangements and rousing rhythms Los Des wield are heavily influenced by the music they've all grown up on as native North Londoners—rock 'n' roll, jazz, folk, flamenco, funk and soul. For further info & bookings: www.myspace.com/losdesterrados1, www.losdesterrados.com. (Lewis Robinson)

Fans first heard Divahn's Mizrakhi/Sephardic grooves deep in the heart of Texas. This Austin-based quartet infuses traditional songs with sophisticated harmonies and arrangements using tabla, cello, rabel, banjo and other instruments, plus vocals in Hebrew, Ladino, Persian, Arabic and Aramaic. The group distinguishes itself as the only all-female ensemble performing Mizrakhi-influenced music in the US, and features vocalist Galeet Dardashti, who comes from a long line of eminent Iranian singers. Divahn captures the breadth and diversity of Mizrakhi and Sephardi music throughout the centuries, while simultaneously creating and redefining innovative directions for the music in the present. For more information on Divahn itself, or their eponymous debut CD or 2020's Shalhevet: www.divahn.com. (Galeet Dardashti)

Doina Klezmer aspire to respect the tradition of klezmer, but also to step ahead and create music which reflects the life of our time. As they meet, the Finnish bare sound world and the joyful beauty of klezmer arouse a tensioned musical state. Another meeting, the deep mentality of a Finn and the extrovertness of klezmer feed each other and give musicians new paths and impulses to follow. Third, the meeting of improvisation and tradition gives the music a unique and living nature, connecting also to the past. This group is not just a klezmer band, it is a Finnish klezmer band. The band's first album, "Sonja Tanz", was released in 2001. The second album of Doina Klezmer, Nomada, was released in spring 2004 by the Finnish Alba records (www.alba.fi). Management: Mrs. Pirjo Aittomäki, int. telephone: +358 40 5073031. Web: www.doinaklezmer.com. (Pirjo Aittomäki)

Dor L'Dor was born in that nascent center of yiddishkeit — Knoxville, Tennessee — jointly delivered by Ken and Susan Brown not long after discovering that they were "with band." As the name suggests, Dor L'Dor hearkens back to the practice of families of klezmer musicians passing down this rich musical tradition to their children. The original group consisted of Ken (clarinet), Susan (piano), their three children (on trombone, bass, and tambourine), and Ken's brother on drums. As different "Dors" exit and re-enter to and from college and graduate school, students from the University of Tennessee's amazing trombone studio have joined us. Our current instrumentation is: clarinet, piano, bass, mandolin, drums, and three (sometimes four) trombones. That's right, four trombones. You'd be amazed at what possibilities that opens up for the traditional repertoire (and not just for our arrangement of "Joshua Fit the Battle of Jericho" with four trombones and shofar). We do concerts, we do simchas, we do international festivals, we do nuclear facility safety expos. Freilachs, waltzes, Elvis, Beatles, horas: everybody's gotta dance. Dor L'Dor's first CD, "Dance for Your Life," can be purchased at CDBaby.com. Web: dorldor-klezmer.com. (Ken Brown)

Doyna, Cologne, Germany. KlezmerJazzFunk. The duo with clarinet/bassclarinet and guitar plays traditional tunes in a free way. Their improvisations over themes from Klezmer and Sephardic music are connected with southeastern european phrasing as well as with grooves from jazz, rock and funk! Web: www.annettemaye.com. (Annette Maye)

The band "Die Drei Dudelim", Hilversum, The Netherlands, The band Die Drei Dudelim ('the three players of tunes') consists of three good friends who have been playing Klezmer music since 1994. Their music is heavily inspired by the old Eastern European Klezmer tradition, but with a modern 'feel', and it clearly reveils their classical music education. The Dudelim are multi-instrumentalists, playing several guitars, violin, clarinet, and mandolin as well as double bass, but they also distinguish themselves by their excellent vocals. The moods of their songs vary from quiet and melancholic to vibrant, fast, and full of excitement. Web: www.dudelim.nl. (Merlijn van Spengen) 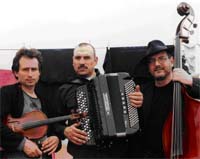 Duckmandu, San Francisco Bay Area, CA. Aaron Seeman's onslaught of solo accordion and vocals has astounded audiences of all shapes and sizes. Maximum Rock 'n' Roll, the premier punk magazine, pronounced him "over the top!" for his note-for- note renditions of the entire first Dead Kennedys album, Fresh Fruit for Rotting Vegetables. His repertoire also includes, but is not limited to, 70's rock, Broadway, klezmer, classical, country, Sousa marches, punk rock, and even a polka or two. Rather than play hokey accordion versions of these songs, Duckman/Seeman seeks to demonstrate that accordion and vocals alone can evoke the spirit of the song, whether the hard driving rock of AC/DC, the wide vocal range and sonic landscape of Boston, or the supersonic speeds and driving force of Dead Kennedys. The accordion received a triple blow to its image in American culture that by the 1960's had done serious damage. First, millions of American children were forced to play the unwieldy instrument against their wills. Second, Lawrence Welk's widely watched show focused only on the geekiest, corniest aspects of the instrument. Third, there was the rise of rock 'n roll and the electric guitar. This is not to say that the Duckman renounces geekiness, far from it. But America and the world must be reminded what a powerful and versatile instrument the accordion can be. Tel: (510) 601-1117. Web: www.duckmandu.com/. (Aaron Seeman) 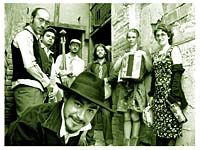 Dumbala Canalla, located in Barcelona, Spain. Tzigane, Klezmer, Circus, manouche, pop and jazz. Timbre and armonic rythm and colors from the east europe are a brand new composition ingredients that keep and renew european musical tradition. Helena Casas and Amanda Wright's lyrics enrich these compositions giving a fresh and enjoyable spirit to them. Texts that get inside daily life surrealism world, that written in catalan and english give an unmistakable oddness stamp to the band. Tel: +34 937 899 151. Web: www.dumbalacanalla.org. (Yla Gallina)

Duo NIHZ, Enschede, Overijssel, the Netherlands, is a dutch ensemble formed by bobby rootveld (guitars, percussion, voice and harmonica) and sanna van elst (recorders, percussion, kazoo, glockenspiel, voice). Both members are classical trained musicians. Duo NIHZ plays a cross-over style of music mixing classical with influences of jazz, pop, rock and off course Klezmer all into their own arrangements and compositions. The love for Klezmer-music was always in their lives and because Bobby Rootveld has a Jewish background Duo NIHZ decided to play Klezmer. In 2008 Duo NIHZ released their second album: Jewish Music. This album includes Yiddish songs like "Papirosn" and "Tum Balalayka," Hebrew pieces like "Mussaf" and "Erev Ba," own compositions, the Dutch Jewish Classic "Amsterdam Huilt" and many more. In 2009 Duo NIHZ will release a DVD together with Italian guitarist Alberto Mesirca. The DVD will include Jewish Music recorded in the beautiful Synagogue of Enschede in the Netherlands. Contact: Duo NIHZ, Overijssellaan 14, 7543 wd Enschede, The Netherlands. Tel: 0031-6-20019585. Web: www.duonihz.com. (Bobby Rootveld)

Thank you for visiting: http://www.klezmershack.com/contacts/klezbands_d.html
Pages copyright © 1995—2020 by Ari Davidow. All rights reserved. Last revised 02 May, 2020.