Led by Moroccan-born Israeli star vocalist and percussionist Shlomo Bar, Habrera Hativeet combines Eastern and Western instruments to create a unique sound that springs from authentic Sephardic, Eastern, African, Hasidic and Middle Eastern roots. Instrumentation includes the 'oud, classical guitar, flute, Irish whistle, bass, darbuka, dholak (Indian double-sided drum), daira (frame drum), Persian santour (hammered dulcimer) and violin. The group takes much of its musical inspiration from Biblical and modern Israeli themes, in an effort to link Israel's past with its future. "For me," says Bar, "music is something eternal without beginning or end. In my music there are elements of prayers, wonder, yearning and messianism." Habrera Hativeet’s website includes online music samples and CD ordering (tough to find outside Israel). Their 25-plus years of music are featured on a double-CD collection released in 2003: Mayim Neemanim – Faithful Waters. A 2003 appearance on NPR's The Connection: www.theconnection.org/shows/2003/05/20030509_b_main.asp. Available outside of Israel. Web: www.shlomobar.com. (Eran Segev)

Hasidic New Wave is a Jewish-Jazz fusion band fronted by Greg Wall and Frank London. They have three albums out. The first was Jews and the Abstract Truth, 1997, then "Psycho-Semitic" (1998), followed by "Kabalogy", 1999 and "From the Belly of Abraham," 2001. (Greg Wall)

Hazaar, based in Exeter, Devon, UK, has brought together six musicians each with a very different history of influences and styles. The traditional tunes that the band perform have become a fresh fusion that demonstrates the virtuosity and creativity of these individual artists. Hazaar's set is bursting with character from many genres that combine to create an authentic yet modern, on-the-edge approach to the klezmer traditions. Consisting of Flute, Violin, Clarinet, guitar, double bass and drums. A band guaranteed to bring laughter, song and dance! Tel: 0164 727 7525. Web: https://soundcloud.com/hazaar . (Aquara Bidder)

The Heartland Klezmorim, E. Lansing, MI, has been together since 2006. They have performed throughout Michigan playing concerts, dances,and private events. Heartland Klezmorim is a regular at folk festivals in Michigan and give lecture/demonstrations on how to play klezmer. Their first CD was released in October of 2010 and is available directly from the band. Contact David Klein at 517-333-3988. Web: heartlandklezmorim.com/. (David Klein) 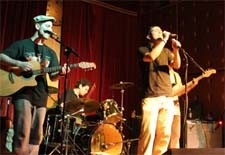 Heedoosh. As its name implies, the music of this new band is something of a revelation. The brainchild of two Israeli Yemenite brothers, Yahav and Yaniv Tsaidi, Heedoosh performs deeply personal, spiritual Jewish rock music that pulls no punches. Web: www.heedoosh.com. (Trevor@Ariel Publicity)

Our group is called The Hester Street Troupe and we are located in New Jersey. Our first two albums are "Generation to Generation" and "Sounds of the Shtetl." We also appear on the "Klezmer for Kosovo" album. Our third album is "On Second Ave." (2001). We have been together for about 20 years chiefly playing in the NY Metro area. Tel: (908) 276-5245. Web www.HesterStreetTroupe.com. (Alan Sweifach)

Hip Hop Hoodíos is an allstar Latino-Jewish rap project based in Brooklyn that features members of major Latin- alternative groups including Caifanes/La Barranca, Orixa, and Los Mocosos. Many of the members come from mixed Latino-Jewish backgrounds, with heritage from Puerto Rico, Mexico, and Uruguay. The band's multiethnic background is reflected in the music, which includes a merengue hiphop version of "Hava Nagila" reworked as "Havana Nagilah", as well as a reggae/punk version of the sephardic Hanukkah song "Ocho Kandelikas". The band's first release (Jan., 2002) was the "Raza Hoodia" EP. Band website: www.Hoodios.com. Booking agent: Zamo!. (Josue Noriega).

The spectacular Hollywood Klezmer performs traditional klezmer with a unique fusion of Middle Eastern, Sephardic, jazz and classical sounds. Each musician in the group is a star performer in his own right, plucked from the top Hollywood recording studios and international concert circuit. With its roots in Eastern European Jewish culture, this World Music group entertains, educates and uplifts audiences with its joyful celebration music. Based in Los Angeles, California, Hollywood Klezmer is available in a variety of configurations for featured concerts and exclusive, private engagements anywhere in the world...from L.A. to Odessa! Tel: (818) 776-8084, P.O. Box 1448, Beverly Hills, CA 90213-1448. Web: www.HollywoodKlezmer.com. (Jordan Charnofsky).

Homentaschn is based in Lauffen, Baden-Wuerttemberg, Germany. Our program combines yiddish songs and klezmer with photos of the shtetl by Roman Vishniac, a polish photographer, with a short story by I.B. Singer, and information on the shtetl. Write: Suedstrasse 18, 74348 Lauffen, Germany. Tel: (49) 07133 16405. Web: www.homentaschn.de.vu. (Rainer Albrecht)

Hoo-Tza-Tza is a Santa Cruz, CA-based ensemble specializing in Klezmer and Gypsy music. The band consists of: Laurie B. Tanenbaum, violin; Ken Mowrey, percussion and guitar; Mark Hamersly, Bass; Bob Burnett, Guitar/ Mandolins. Hoo-Tza-Tza began enchanting the patrons of Santa Cruz area cafes in 1992, and they have since then been hired for numerous performances at parties, weddings and mitzvahs. The band has performed at the Cabrillo Music Festival's Art Fair, the Claremont folk Music Festival and at the Temple Beth El New Year's Klezmer concert (opening for the New Orleans Klezmer Orchestra) and many others.... Hoo-Tza-Tza can be reached best by phoning Laurie at 831-423-4719. (Laurie B. Tanenbaum)

Hot Kugel is a San Francisco Bay Area based Klezmer ensemble. Primarily rooted in klezmer, Hot Kugel blends musical styles ranging from traditional ethnic folk, old time jazz, theater and American popular music, as well as blues and reggae. We are constantly exploring the diversity of musical influences that have inspired Jewish music "from the sublime to the ridiculous". The sound is a tasteful integration of traditional Yiddish music and other inspirational musical styles. Es iz geshmak! The Klezmorim: Suska Varda who sings passionately theatrical vocals in Yiddish, Hebrew and Ladino and plays mandolin, guitar and keyboards with Mordecai benHerschel who plays an antique cornet, classical finger style guitar in Folk and light jazz styles, Euphonium, melodeon, and other "toys". They are joined on occasion by old timey percussionist (blocks, washboard traps and drum kit) Petie DeVine (of the ragtime trio "Bo Grumpus") and orchestral violinist Laurie B. Tanenbaum of Santa Cruz’s "Hoo Tza Tza". Web: www.hotkugel.com. (Suska Varda)

Jinny Marsh's Hot Kugel Klezmer Band, based in Springfield, VA, brings together the hottest musicians in the Washington area! We play a variety of Klezmer, Yiddish, Chassidic, and Israeli dance tunes as well as Classical, American standards, Broadway and good ol' Rock 'n' Roll. We offer all the popular B'nai Mitzvah kid games. Hot Kugel has a reputation for energizing your guests to get them up and out of their seats, onto the dance floor ­ and keeping them there. Based in Washington, D.C., Hot Kugel regularly performs for Jewish community events and has been featured at Kennedy Center's Millennium Stage, The Library of Congress and the Smithsonian Folk Life Festival, Washington, D.C. in 2001. We have also been featured at the National Folk Festival in East Lansing, Michigan, and the Lowell Folk Festival in Massachusetts. We regularly perform in Virginia, Maryland and Washington, D.C. We are available for Bar/Bat mitzvahs, weddings, parties, anniversaries, fundraisers and concerts. We also offer rousing horas, kid's games and teach folk dancing. This band will get your guests up and dancing! Jinny Marsh's Hot Kugel Klezmer Band also has a CD out called "Grandma's Recipes." Web: www.hotkugelklezmerband.com. (Jinny Marsh).

The Hot Latkes Klezmer Band is London, Ontario's own professional Klezmer ensemble. Launched in the spring of 1993, the group has developed an extensive repertoire of Klezmer and Yiddish theatre music, much of it based on the work of luminaries of the past including Dave Tarras, Abe Schwartz, Molly Picon, Harry Kandel and Aaron Lebedeff. In addition to traditional Yiddish material the Latkes have delved into Ladino and Yemenite Jewish music as well as Greek and Gypsy music. In 1999, we released our first CD, "Eine Kleine Klezmermuzik". Web page: hotlatkes.com. Contact Ian Davies, tel: 1-519-473-2099 or Toll Free at 1-877-801-9458. IDEA - Ian Davies Entertainment Agency, 20-9 Cadeau Terrace, London, Ontario, CANADA N6K 4T5. (Ian Davies)

Hot Pstromi, was formed in 1988 and performs klezmer music with an added knaytch (twist). Being one of the first revivalists to do field research in Eastern Europe, our band performs many tunes that have never been written down or recorded. I have also done considerable research in the Rom (Gypsy) community (having written the book "Uncertain Roads: Searching for the Gypsies") where I have been able to collect klezmer tunes the Rom still play but where there are no Jews left. My research has also taken the form of film where I have directed three films, all of which use klezmer music in some form. The films are "At the Crossroads," "The Last Klezmer" and "Carpati: 50 Miles, 50 Years." My band also plays a lot of Khasidic nigunim as I have a collection of over 70 Stoliner Nigunim, never published given to me by a klezmer who lived in Pinsk and performed for the Stoliner Rebbe, before WW Two. And to keep things lively I am constantly composing new instumental melodies and Yiddish songs for the band that combines, classical/Balkan/Arabic/Rom and jazz motifs. We are a sextette consisting of violin, vocals, bass, accordion, percussion and clarinet/sax. We have CD's out out the Global Village Music Label. Contact us: tel: 917 923-7434. Web: www.yalestrom.com. (Yale Strom)

The name of the band Huljet is as jiddish as their Klezmer music and means "Live! Dance! Cheer and sing". The five guys musicians from Nuremberg have dedicated themselves to the magic and pleasure of this music especially because of it's ability to take up all kind of styles and always keeping it's originality. Their first album, "A Kind Of Klezmer" features both traditional and original songs. Their second CD, released in 2000, is called "the goijgroup". Both CDs are produced by heartmoon-rec./Indigoo. Also the band has produced a video by ourselves "huljet-live", and have done tours in Russia and Israel. Their most recent CD is Meschugge (2004). Into their refreshingly experimental arrangements and expressive sound combinations they even include elements from classic, jazz and worldmusic. The current lineup is: Bettina Ostermeier: Klarinette, Akkordeon, Gesang; Robert Hofmann: Gitarren, Oud, Darabouka; Martin Zels: Marimbaphon, Glockenspiel, Gesang, Conférence; Tobias Kalisch: Kontrabass, E-Bass; Sandor Toth: Schlagzeug, Gesang . Contact: c/o Bettina Ostermeier, Helmstrasse 23, 90419 Nürnberg. Web: https://www.huljet.de. (Martin Zels)